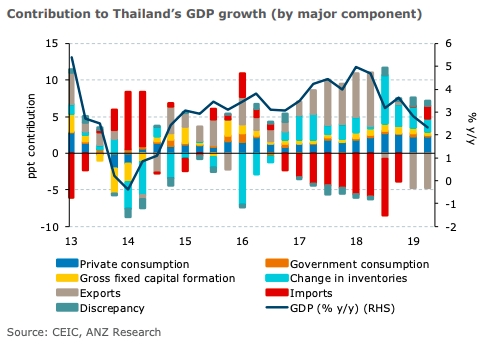 The GDP breakdown showed a broad-based slowdown in domestic demand, with private consumption, government spending and investment all expanding at a slower pace. Stock-building also eased.

Meanwhile, the downturn in exports persisted, while the decline in imports deepened, resulting in a smaller drag from net export growth. By sector, agriculture and manufacturing contracted by 1.1 percent y/y and 0.2 percent y/y, respectively, in Q2, reflecting lower crop yields amid unfavourable weather conditions and weak external demand.

However, the recovery is likely to be modest. For a start, it remains unclear how quickly (and to what extent) the fiscal package, which is still pending cabinet approval, will filter through to the economy. It’s worth noting that the THB370 billion package includes THB270 billion in loans from state-run banks and the economic impact of which will be dependent on whether (and when) these are drawn out, the report added.

The combination of weaker-than-expected growth (BoT’s current growth projection is 3.3 percent), the relative strength of the baht, delays to the FY2020 budget and moderating core inflation raises pressure for the BoT to adopt a more accommodative stance.

"Looking ahead, there are reasons to believe that Q2 may have marked the worst for Thailand’s growth, but multiple headwinds suggest that any recovery is likely to be modest. Our full-year 2019 growth forecast is 2.9 percent, and we continue to pencil in a 25bp rate cut by the Bank of Thailand (BoT) by year-end," ANZ Research report added in its comments.