Rivian I.P.O. Is Embraced by Investors Looking for Another Tesla

The electric-vehicle maker, backed by Amazon and Ford, ended its first day of trading valued at $86 billion, though its deliveries so far total 156. 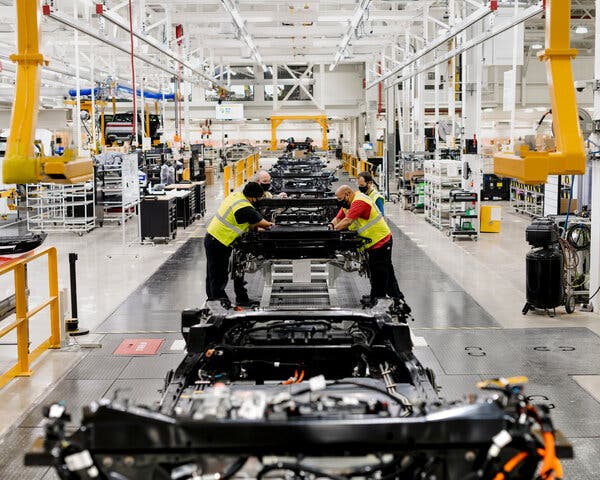 Rivian, an electric-vehicle maker that has been around for over a decade, finally got around to delivering a product this year — 156 pickup trucks — and nearly all went to its employees.

Despite that minuscule total, investors on Wednesday decided Rivian was in the same league as some of the most recognized names in the auto industry, like General Motors and Ford Motor, which churn out millions of vehicles a year.

In the first day of trading after its initial public offering, Rivian’s stock jumped 29 percent, putting its market value at $86 billion — in line with G.M.’s and higher than Ford’s.

The fevered buying did not come out of nowhere.

The stock market is up 25 percent this year, even with the pandemic’s disruptions. But investors also increasingly believe that the market for electric cars will be enormous — and, for now, they are happy to bet big on companies in the sector that show promise and appear to have credible leadership.

And of course they are hoping to find the next Tesla, a company that is on track to sell nearly a million cars this year and that has captivated the stock market for months with a rally that has lifted its value to $1 trillion.

But Rivian is a long way from proving that it can vastly ramp up its production lines. And a failure to expand fast — as other automakers crowd into the market — could shake investors’ confidence, hurting its financial prospects.

“Anybody who is going to pay a high price in the I.P.O. expecting it to scale fast may be disappointed,” said John Paul MacDuffie, a professor of management at the Wharton School of the University of Pennsylvania. “A little bit of patience to combine with the excitement is appropriate.”

Tesla’s struggles with production caused its cash to hemorrhage and its stock to plunge. And by giving Rivian such a high valuation at the outset, investors are betting on a much smoother expansion for the company and its chief executive, R.J. Scaringe, who has a doctorate in mechanical engineering from the Massachusetts Institute of Technology.

“This is the first step of many, with us being a public company, and now having the opportunity to really accelerate our areas of focus,” Mr. Scaringe said Wednesday in an interview with Bloomberg Television.

Rivian’s upscale pickup truck, the R1T, is aimed at drivers who like off-roading. (“Keep the world adventurous forever,” the I.P.O. prospectus proclaims.) The company plans to start delivering a sport utility vehicle next month, followed by a delivery van developed with Amazon, which owns around a fifth of Rivian. Amazon has ordered 100,000 of the vans.

But Rivian appears to be tamping down expectations. In a recent financial filing, the company said it did not expect to fulfill the 55,400 orders it has received for the truck and the S.U.V. until the end of 2023.

And even if Rivian avoids severe production difficulties — all the more unlikely when global supply chains are strained — the company will face competition on many fronts.

The contract with Amazon could provide a steady revenue stream. But on the consumer side, Rivian faces competition not just from Tesla, which is developing a truck, but also from automakers that have much experience with mass production. Next year, Ford is supposed to start producing an electric version of its F-150 pickup truck, the top-selling vehicle in the United States. G.M. is expected to soon begin selling an electric GMC Hummer — in both truck and S.U.V. versions — and is working on a Chevrolet Silverado electric pickup.

Consumers may also question whether Rivian will provide service for the vehicles. The company has no dealers and intends to sell vehicles directly to consumers. Tesla uses the same approach, and many customers complain of waiting weeks for parts and repairs. For Tesla owners in Michigan, for example, the nearest service centers are in Chicago and Cleveland.

Charging remains a challenge for all companies introducing electric vehicles. While stations are available in many urban centers, their numbers are fewer in suburbs and many less densely populated areas have no charging infrastructure. That could be a particular issue for Rivian since it expects owners to take its vehicles out into the wilderness where the nearest charging station could be many miles away.

The big question hanging over young electric vehicle companies is whether they have enough cash on hand to finance their expansion when sales are still low. Rivian used up $3.5 billion of cash on operations and capital spending from the start of 2020 through the end of June this year. But Rivian appears to be able to finance its expansion into the near future. It had just over $5 billion of cash on hand at the end of September, and the I.P.O. will bring in nearly $12 billion.

Rivian’s I.P.O. was one of the largest in recent years, exceeding Uber’s 2019 offering, which raised $8 billion. But it is smaller than Facebook's 2012 offering, which raised $17 billion. So far this year, companies have raised $290 billion in 901 deals, compared with $169 billion raised in 457 deals in all of last year, according to the data service firm Dealogic. The stock market is playing a crucial role in funneling money into new sectors of the economy, including companies deploying green technology.

But to some analysts, investors are just throwing money at what’s hot, and not doing enough to discern which companies are actually strong. “The market’s pricing mechanism is broken and you can’t see the real successes,” said Mr. O’Rourke of JonesTrading.

But Mr. MacDuffie. the Wharton professor, said he believed there was enough potential growth in the electric vehicle market for many companies to succeed. “It’s not so much a winner-takes-all market,” he said. “We are probably more at a rising tide lifts most boats, if not every boat.”

Investors that took an early stake in Rivian, Ford and Amazon included, are sitting on big gains. Ford’s Rivian shares were worth $10 billion at Wednesday’s closing price and Amazon’s at least $16 billion.

And Mr. Scaringe, Rivian’s chief executive, is also sitting on a fortune. His shares in Rivian are worth over $1.7 billion. And this year, Rivian’s board approved a new stock award for Mr. Scaringe that could be worth over $7 billion if the stock trades as high as $295.