Manufacturers’ demand for new machine tools totaled $590 million during September, the highest monthly level for the current year as orders remain at a record from consumer and industrial sectors.

U.S. machine shops and other manufacturers ordered $589.96 million worth of new machine tools during September, 8.9% more than during August and 58.1% more than during September 2020, continuing the robust rise in capital spending on manufacturing technology. It is the second consecutive month of rising demand for new machinery, and the highest monthly total for 2021. Through nine months of the current year, machine-tool new orders total $4.115 billion, 53.1% higher than last year’s order volume, according to the U.S. Manufacturing Technology Orders Report.

“It took 31 months after the bottom of the 2008-2009 financial crisis to have a single month with half a billion dollars in orders, but September is the third month of 2021 exceeding that mark,” observed AMT president Douglas K. Woods. 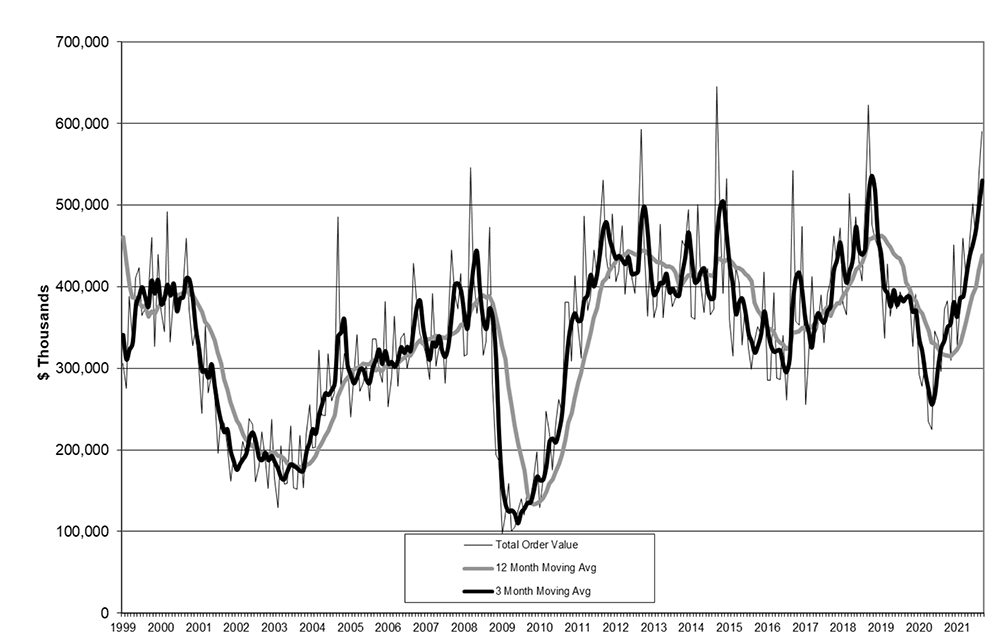 U.S. manufacturers' new orders for capital equipment totaled $560 million during September, up 8.9% from August and 58.1% from September 2020. The U.S. Manufacturing Technology Orders report shows machine-tool demand totaled $4.11 billion during the first nine months of 2021, 53.1% higher than the January-September 2020 total.

“Economists project the United States is past peak growth, yet machine orders remain at a record pace to meet remaining consumer and producer demands,” Woods added.

He pointed out, however, that the September report shows particular strength in certain market segments, and notably it was not among machine-shop buyers, whose orders slipped -7.0% from August. “Machine shop orders usually dictate the direction of the month,” according to Woods. “September 2021 was an exception to that trend, which highlights the breadth of the recovery across manufacturing sectors.”

The engine, turbine, and power-generation sectors had the largest share of orders in September 2021 and their highest monthly value since December 2011.

AMT commented that those investments point to efforts to increase power-grid resilience.