The steel industry is warning of job losses as a result of the EU's failure to impose high import tariffs on a steel product made in the UK. 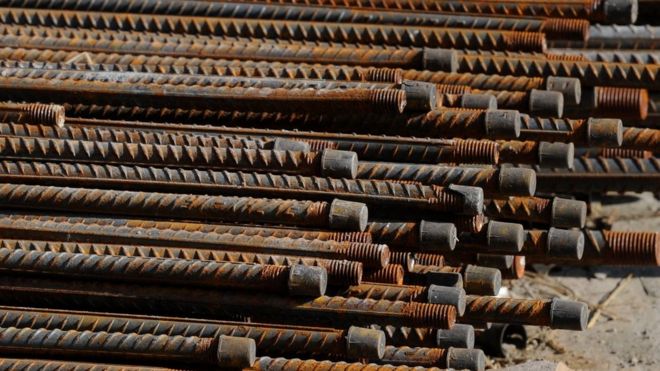 The EU has set provisional duties on Chinese imports of reinforced bar or rebar of between 9.2% and 13%.

Industry body UK Steel says its shows: "the scale of the crisis affecting the European steel sector has not yet fully registered with Brussels bureaucrats".

It says the decision is "a slap in the face for UK manufacturers of rebar".

UK Steel says that Chinese companies have taken more than 45% of the UK rebar market, having had none of it four years ago.

"Unless these provisional duties are increased, then we will see further job losses in the rebar sector in the future, as China shows no sign of stemming this tidal wave of rebar exports, with ever increasing tonnage reaching our shores," it added.

The main maker of rebar in the UK is Celsa Steel, the Spanish owned steelmaker, which is based in Cardiff.

"In the meantime, we hope the construction sector will recognise their responsibility to support sustainable British steel in the supply chain, and avoid these unfairly traded products."

Commenting on the decision by the EU to impose low-level duties on the imports of Chinese rebar, Roy Rickhuss, general secretary of Community, the steelworkers' union said: "British steelworkers could be forgiven for thinking the EU hasn't noticed the global steel crisis crippling our industry.

"The decision to impose such a low duty on imported Chinese rebar clearly demonstrates that EU politicians just don't get it.

"Having already taken far too long to act, it only adds insult to injury to effectively give China a slap on the wrist.

The Commission launched an anti-dumping investigation into imports of HFP rebar from China in April following a complaint from European steel association Eurofer.