For six days, IFFA – The No. 1 for the meat industry – showed how the sector can get fit for the future. From the smart meat factory, packaging trends and food safety, via clean labelling, to the growing expectations on meat quality, IFFA exhibitors provided answers to the demands of the meat-processing industry and the butchers’ trade. And this against the background of an excellent investment climate.

“IFFA has once again shown that it is not only one of our longest-established trade fairs but also, above all, the global meeting place for the sector. Seven out of ten visitors came from outside Germany. The mood in the halls, on the exhibition stands and in the aisles was fantastic”, summarised Wolfgang Marzin, President and Chief Executive Officer (CEO) of Messe Frankfurt. “At the same time, IFFA is the family meeting place of the meat-processing sector – the meat industry, the machine manufacturers, the packaging companies, the spice suppliers, the trade and butchers. Many of these companies have been in the hands of the same family for generations and IFFA is where they meet to shape the future every three years.”

This was also confirmed by the results of a visitor poll conducted by Messe Frankfurt: 96 percent of trade visitors gave IFFA a positive rating. On the exhibitor side, too, there was also an outstanding echo with an overall level of satisfaction of 92 percent. 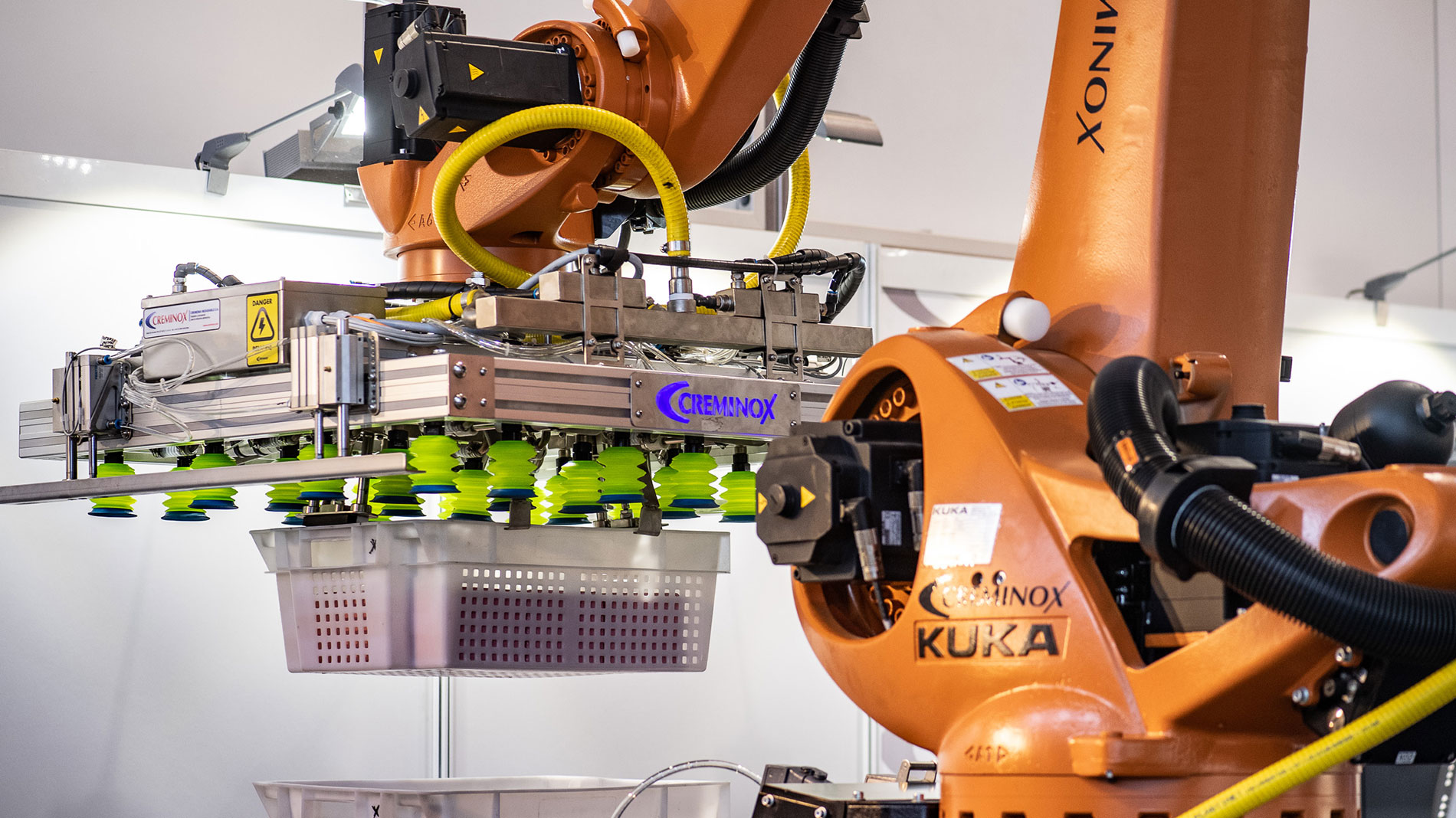 Welcome to the future – innovations at IFFA

As the driving force of the sector, digitalisation put the focus on the smart meat factory. Automation and software solutions make production and processes more intelligent. Food safety continues to be an important subject with the aim being to replace manual activities with automatic processes. In this connection, exhibitors showed, for example, the fully automatic portioning and placement of steaks or cold cuts in packaging materials using feeders or industrial robots. Also important in the packaging field are smart solutions to protect meat and meat products whereby the spotlight is on resource conservation and sustainability in terms of the energy efficiency of machines and process chains, as well as climate-neutral packaging. All in all, the outlook for meat-industry suppliers is positive with worldwide meat production expected to rise by five percent per annum until 2027.[1]

85 percent of trade visitors consider the economic outlook to be positive and rate the current situation of the industry as being satisfactory to good.

The significance of meat in society remains very high. Traditional butchers score with consumers by offering quality and regional products. Accompanying this trend are new careers, such as meat sommelier. Innovative sales concepts, such as online shops, clever catering ideas and customer communications via the social media are making the butchers’ trade fit for the future. Additionally, artisan skills of the highest order could be seen at the international quality competitions of the German Butchers’ Association (DFV). Moreover, trainees had the opportunity to demonstrate their talents in the international young-butchers competition in which the best up-and-coming butchers from six countries competed against each other.

The challenge: a shortage of skilled personnel

Machine manufacturers and the butchers’ trade have a challenge in common: a shortage of skilled personnel and trainee problems. Companies must invest more in digitalisation, automation and robot technology to lift the load from employees and simplify all meat-processing stages – such solutions for companies of all sizes and kinds were to be seen at IFFA. This was confirmed by 95 percent of trade visitors who said they were very satisfied with the range of products and services to be seen at the fair.

A journey into the future: from the butchers’ trade exhibition to the world’s leading trade fair

IFFA was first held 70 years ago as an exhibition accompanying the conference of the Butchers’ Association of the US Zone in Frankfurt and has developed over the decades into the world’s leading trade fair for the international meat sector. In 2019, 70 percent of trade visitors came from outside Germany – the top ten foreign visitor nations are the Russian Federation, the Netherlands, Spain, Italy, Poland, China, the Ukraine, the USA, Austria and Australia. Particular growth was registered from Latin America (+31 percent) and East Europe (+15 percent). 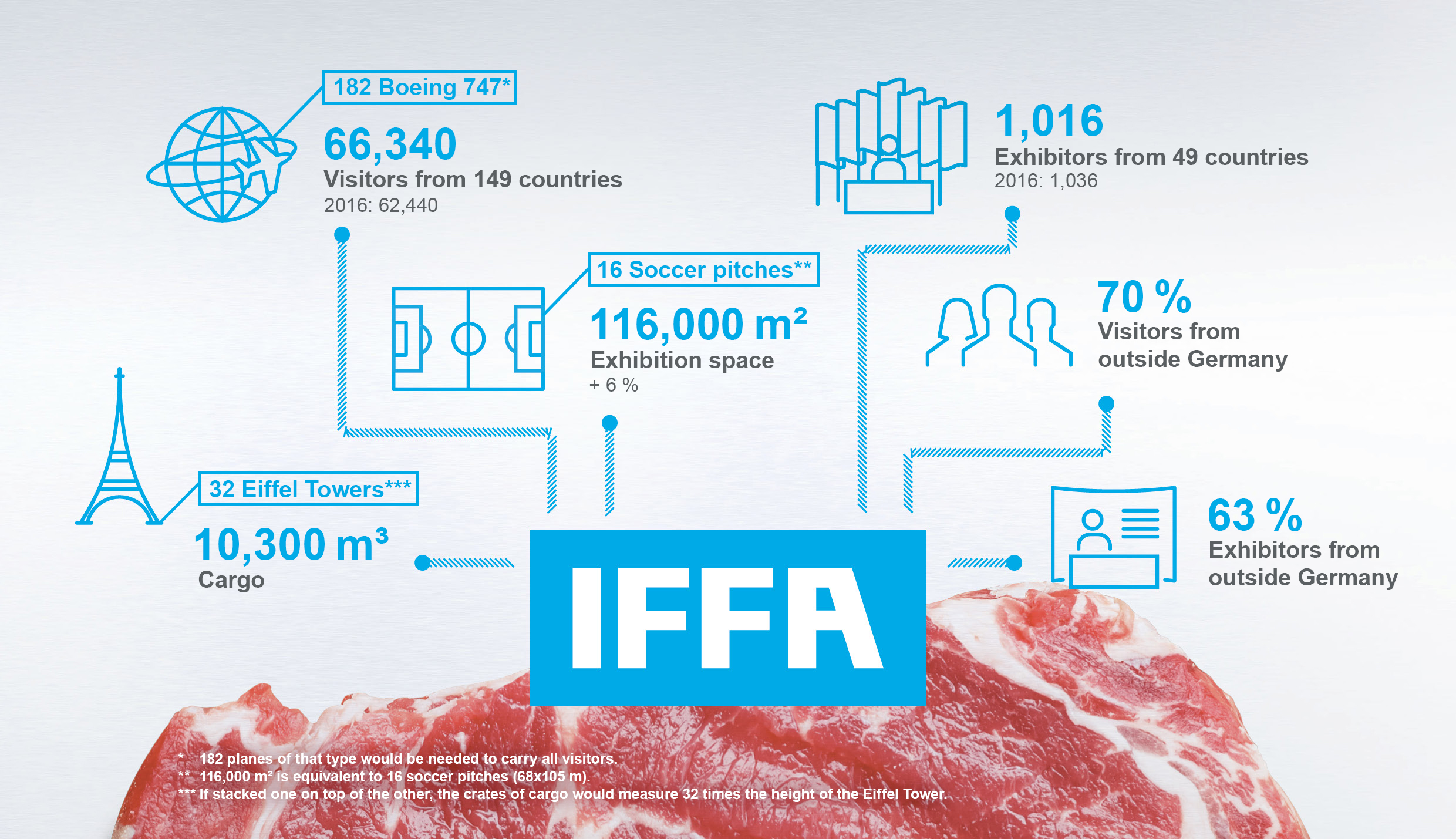