China’s economic data has long been questioned by investors dubious of its elevated official growth rates, year-in, year-out. Now, as the nation’s expansion moderates, it’s the uncanny consistency of the slowdown that has some analysts skeptical.

On average, the GDP growth rate has changed 0.2 percentage points each quarter since 2011, less than half of the mean for the rest of the world’s top 10 economies. During the same period of time, China’s economy contended with crude oil prices that gyrated from $35 to $114 a barrel, the country’s exports went from expansion to contraction, and volatility in its stock market surpassed that in other major countries. 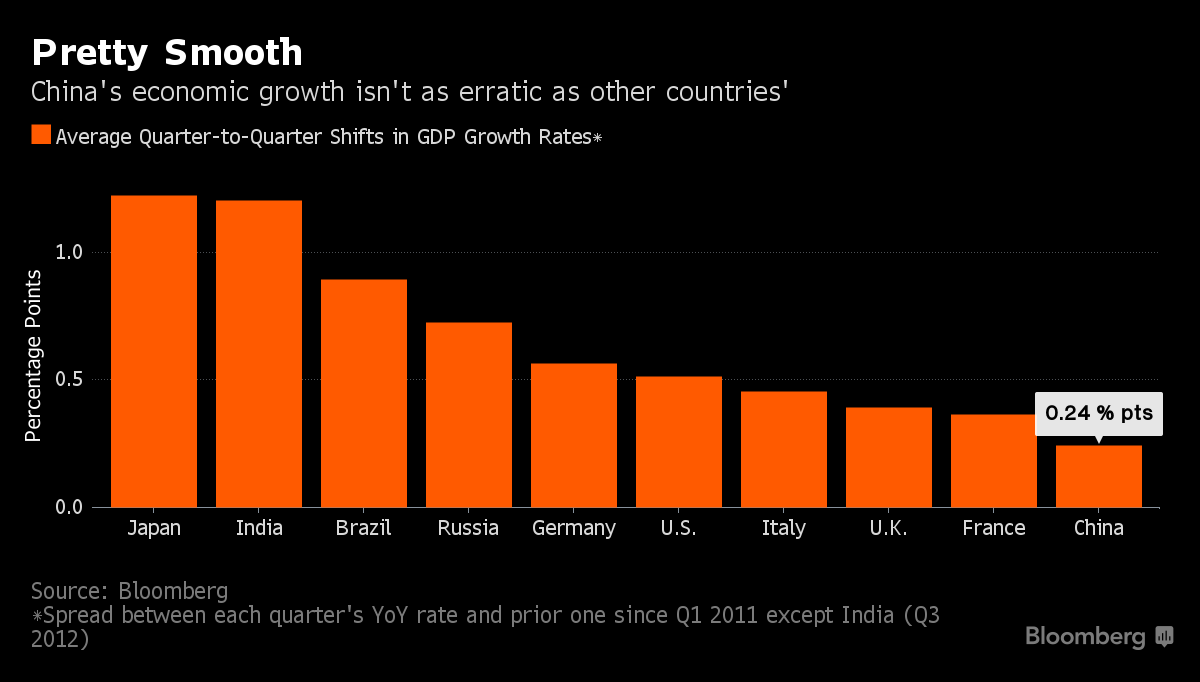 “The data are remarkably smooth and you don’t see that in other major economies,” said Mark Williams, chief Asia economist at Capital Economics in London. “If the data is not credible, it affects how investors look at China’s policies in general. The lack of credibility also makes it much harder for China’s policy makers to do their job.”

It’s hard to measure any economy as large and complex as China’s, especially as it undergoes an historical transformation. But small changes in China’s GDP figures help explain investors’ concern about the quality of its statistics. Bill Gross, the renowned bond investor, once called China the “mystery meat” of emerging-market countries.

While Chinese officials have pledged to crack down on fake data, they may be motivated to report a higher GDP figure to meet their growth targets, said Williams, who previously worked on China issues at the U.K. Treasury. Difficulties in tracking the increasingly important consumer and service industries also may distort the statistics, he said.

The lack of transparency of China’s policies and data contributed to the global rout earlier this year, which helped wipe out more than $6 trillion in stock valuation worldwide. To better gauge China’s growth, banks and private firms, including Capital Economics and Lombard Street Research, have relied on alternative methodologies, resulting in widely dispersed estimates.

The National Bureau of Statistics then-chief defended the credibility of GDP data in January -- days before news he was being investigated amid the government’s campaign against corruption. The NBS, now led by a close adviser to Premier Li Keqiang, has taken steps to improve its data quality and the nation’s leaders have emphasized the quality, rather than just the speed, of growth as cleaning up the environment and curbing debt become priorities.

But for now, it seems the steady grind lower is set to continue. China’s first-quarter GDP growth rate, which is scheduled to be released Friday, is forecast at 6.7 percent, according to a Bloomberg survey of economists late Tuesday.